Aside from its story and characters, the show gained popularity among some fans for its pairings, despite there not being any signs of romantic attraction between the characters. Many fans tend to see pairings between the triplets and secondary characters, usually Futaba X Satou, Mitsuba X Miku and Hitoha X Yabecchi. This page will try to explain what lead them to this conclusion (and what "evidence" there is in canon).

The two are bitter rivals and are always competing with each other on various things, although Miku secretly takes hundreds of photos of Mitsuba (supposedly so she can use them for blackmail). Given sadistic Mitsuba’s desire to “subjugate” her classmates, there are plenty of quarrels between the two girls in which they end up humiliating each other. Sometimes they can be good friends, such as when Mitsuba invited Miku to eat sushi and when Mitsuba was literally covered in bandages by Kuriyama and believed she was being kidnapped along with Miku and her friends. Later she thought that Miku was dead and then hugged her when she saw she was OK. Despite the fact they like each other, they are too proud to accept any hint of friendship between them. 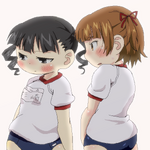 Futaba and Satou are childhood friends and have a very close relationship. She even calls him "Shin-chan" and she is willing to do everything for him. Due to their close friendship, many girls, especially the Hopeless Squad, are jealous of her although she is oblivious to this. Satou is often embarrassed by Futaba, even though unintentional. This is shown when Chiba convinced Futaba that Satou likes panties, so she gave him panties, embarrassing him in front of everyone in the process. For Valentine's Day she gave Satou a handmade chocolate that looked like dog poo and Satou was angered when she said that it wasn't actually for him, but the leftovers for her father. Futaba was the only one to care when Satou was depressed and tried to cheer him up with underwear (to the point of stealing them from Miku and giving him her own) until she found out that he had a fever and carried him all the way home. In Chapter 145, when Futaba missed her father and couldn’t sleep, Satou disguised as Soujirou to console her, resulting in him being tackled by her.

Even Futaba sometimes ends up working with the Hopeless Squad, like when she and all the girls end up chasing him around school to show him their panties. However Satou has shown that he can be annoyed of her attitude, such as when he commented in a soccer match that everything was calm because Futaba wasn't playing and when he said to Chiba that he and Futaba aren't exactly friends, but know each other since they were little. Even though he is put into awkward situations by her, he always forgives her because he understands that it was out of good will.

Hitoha and Yabe are often seen together in the series. Hitoha often spends her entire time in the school under Yabe's desk, calling it her safe place (although it is implied that she likes being there only when Yabe is using the desk, such as in Episode 7 of the second season). Yabe cares a lot about her and often worries due to her antisocial attitude although he gets mad at her due to misunderstandings and everytime she ignores him. Hitoha often treats him with annoyance but she has shown that she genuinely cares about him, such as when Hitoha wanted to apologize to Yabe about insulting his love for Gachi Rangers, when Hitoha was waiting outside the Principal's room after Yabe got scolded because of her, when she was the only one to care about him after Yabe collapsed with a fever, when he won the sports competition (she was clearly surprised) and in Chapter 39 of the manga, she consoled him after everyone (even Futaba) mistook him for a pervert again.

They are often caught in misunderstandings, such as when Hitoha helped Matsuoka to undress Yabe and blushed when she saw him naked (even she already saw him naked before) which ended up with Yabe blaming Hitoha for undressing him after he woke up. On April's Fools Day, Hitoha becomes paranoid about being pranked that she decides not to trust anyone, even Yabe. She ignores him and walks straight into a post and falls unconscious. When she wakes up she blushes when she hears that he carried her all the way home and was about to thank him, only for Yabe to prank her in that moment. Hitoha and Yabe had lots of misunderstandings about Gachi Rangers, which ended up when Hitoha clenches Yabe's hand to tell him she loves them. They became closer after that.

But he got used to it in the end

She blushes, despite she already saw "it" in Episode 1

A depressed Yabe after Hitoha ignores him in the Opening

It is considered one-sided on Miyashita's side. At first Miyashita was scared of Hitoha until she became curious about her anti-social attitude that she even took great measures to get to know more of Hitoha.

Miyashita wants persistently to be friends with Hitoha, to the point Hitoha developed resistance to her and thinks she is a pervert. In the manga Miyashita gets jealous when she hears the rumors that Hitoha likes someone.

changing the light
Add a photo to this gallery

Hitoha and Matsuoka somehow became friends after Matsuoka mistook Hitoha for a medium. Matsuoka admires her and thinks she is beautiful, calling her a "genius spirit medium bishojo". In completely opposite to her cold nature, Hitoha is mild towards Matsuoka whom she seems to have taken a bit of a liking to. Sometimes she dislikes her, such as when Matsuoka spoils her fanatism for Gachi Rangers and burns her Gachi Red photograph, but does not show it out of courtesy. In the manga, it seems that she has come to care about her, such as when Hitoha called her "Sacchan" when Matsuoka was blank and later becomes embarrassed for doing it so.

A somewhat less popular pair due to Chiba and Mitsuba's lack of interaction for most of the series in the anime. In the manga their relationship is much more developed and she is disgusted by him and his perverted attitude and often smacks him. They are sometimes paired together in the fandom due to the fact she is a sadist and he is a pervert. This pair is labeled as "ChibaMitsu" (Pixiv tags: 千葉みつ)

When they were kids, Mitsuba was friend of Satou, but their relationship wasn't as close as his friendship with Futaba. As they grew up, Mitsuba changed her attitude and became distant. It didn't help much that thanks to Chiba and Futaba, Satou was mistaken and labeled as a pervert to Mitsuba. However, as shown in the manga, they can still be good friends. This pair is labeled as "MitsuShin" (Pixiv tags: みつしん)

It is considered one-sided from Yabe's side, because Kuriyama only sees him as a colleague and she is oblivious to his feelings for her. She is sometimes even repulsed by him due to misunderstandings, in which she ends up believing he is a pervert.

Retrieved from "https://mitsudomoe.fandom.com/wiki/Pairings?oldid=8597"
Community content is available under CC-BY-SA unless otherwise noted.